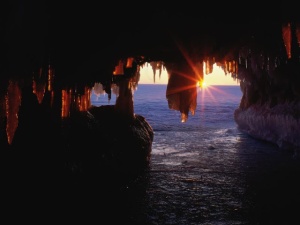 America is the land of opportunity.

We read, speak, and hear the statement on a regular basis. The majority of us even truly believe it. But how does one define “opportunity”?

For David Strzok, the ability to “see the beauty of the world, unspoiled” is one of mans greatest opportunities. As a resident of Washburn, Wisc., Strzok experiences the power of nature on a daily basis.  He places value on sunlight, dark nights, live soil, greenery, sensory nourishment, water, other animals and a sense of safety.

He has worked in this remarkable country as an educator, radio host and cruise ship captain. His honest living, day in and day out, has given him limitless opportunities to feast on the spoils of nature.

Strzok has been lucky enough to retire near Mellen in northern Wisconsin where the biggest lake in the world is right in his backyard. That superior lake is where he captained the ships of the Apostle Islands Cruise Service for nearly 35 years. Those same pristine waters also supply drinking water to 60 million people.

The Great Lakes belong to David Strzok and the 319 million other people who occupy our majestic country. Such ownership is something that we, as a unified Republic, have an obligation to protect.

And when big business rolls into town to capitalize on the natural history of the United States; we must raise a voice and try to reason with these seemingly irrational minds. Just as Strzok did when Gogebic Taconite set up shop to mine iron ore in the Penokee Hills outside his hometown.

Strzok has been a part of and worked in the beauty of the world, unspoiled in Washburn and Bayfield and Hurley. He decided to stand up to the governor and all those other out-of-towners who want to destroy his beautiful countryside in the name of greed.

In an op-ed piece for the Ashland Daily Press, Strzok defended his beautiful, opportunistic land. After all, the freedoms of this nation employ each of us to speak on behalf of Mother Nature.

Strzok said his “intellectual cheeks” were bulging with the right words to adequately describe his protestations regarding the Gogebic Taconite mining project.

According to Strzok, “Writing knocks the common sense ball out of the park.

He’s privy to the fact that one’s wealth of knowledge can never be too rich; and he knows the importance of exercising practicality in the face of political duress.

In his article, Strzok eloquently describes the wonders of untouched earth in northern Wisconsin and the irreparable damage that will be waged if the mining isn’t stopped. He also points out the lies the mining company is selling.

Gogebic Taconite obtained the lease rights under the premise of mining iron ore. However, they are really after the gold, silver and platinum buried deep below the soil. If the company was after taconite pellets, as it says it is, it could tap into the thousands of government-owned battleships sitting at anchor all around our coastlines.

Strzok said he “enjoys the notion of nutritional environment.” His ability to go outside at night and see 1 billion stars in the sky is “intellectually nourishing” to his soul.

If corporate America chooses to rape the land and pollute Lake Superior, his peace of mind will starve and the generations that follow him will never have the opportunity to experience the beauty of his world, unspoiled.

For Strzok, beauty can’t even be spoken of unless it pertains to nature. But greed has clouded the rational thinking of those eager to uproot such beauty and wonderment.

Strzok understands the power behind a single voice and sitting idle while his sanity is being ripped out from under him is not an option. His intent was not to move mountains with his op-ed piece, but rather alert his community to the simple facts.

In general, Americans can’t be told how to think or act; but awakening our senses to the glory that surrounds us is imperative to our mental well-being. Mr. Strzok is a common man standing on a platform of love and responsibility. He is mindful that what he writes is “not the hottest stuff in the world,” but he recognizes that “it’s pretty damn good.”

For him to remain silent would be an opportunity lost.