On Sunday, all of Tinseltown gathered in honor of the 71st annual Golden Globe Awards. The stars of screens big and small united around elaborate tables of exquisite cuisine and bottomless flutes of champagne for some high society hobnobbing.

The Globes are the first of three pre-Oscar award shows and, year after year, this is where the Hollywood elite seemingly remove their suits of armor and let loose. As cameras scan the room before commercial cuts, audiences are granted an inside look into the festivities.

arms outstretched clutching her award in one hand and a tall glass of hooch in the other. We could see Ben Affleck and Matt Damon laughing in one corner, while Robert Redford and Bruce Dern were otherwise engaged in another. Jonah Hill and Margot Robbie froze on stage when the Teleprompter encountered a glitch and a very inebriated Emma Thompson took to the mic with bare feet and a dirty martini.

Two of the sexiest men in Hollywood—Matthew McConaughey and Jared Leto—were  first-time winners for their incomparable performances in the drama Dallas Buyers Club. In the film, McConaughey’s Ron Woodruff is lured out of his shell by the beauty of Leto’s Rayon. Their saucy chemistry allows their characters to grow which, in turn, has presented audiences with actors of newly minted caliber.

Channeling the fashion prowess of her character, Lady Edith, Amy Adams finally nabbed a win for her seductive performance in the comedy (albeit a dark comedy that should have been in the Drama category) American Hustle. The porcelain-skinned chameleon with rouge-colored locks lost on her four previous nominations; but on her 15th anniversary of becoming an actress, the night belonged to her and her scrumptious film.

American Hustle emerged victorious over its worthy competition in the Best Picture-Comedy/Musical category. Inside Llewyn Davis is a far superior film, but the stellar performances in American Hustle made the mediocre storytelling an afterthought. Jennifer Lawrence was awarded for her feisty supporting role… And managed to make it to the podium blooper-free, despite losing a bracelet during a red carpet interview.

The Aviator co-stars, Cate Blanchett and Leonardo DiCaprio, also walked away with Best Actor awards, though the placement of their nominations were a bit confounding. In Woody Allen’s Blue Jasmine, Blanchett delivers one of the best comedic performances in modern history. Her character, Jasmine, is bewitching with layers of mystery and intrigue that are

slowly revealed throughout the brilliant film—which should have landed her in the Comedy category. Instead, she finished atop the nominees for best performance in a drama. She looked positively regal wrapped in black Armani lace as she accepted her award with her usual eloquence. DiCaprio thanked his fellow “comedians” while accepting his Golden Globe for Wolf of Wall Street… Which was also misplaced in Best Comedy/Musical. All of these quizzical placements lead to wonderment about the role of politics within the film industry.

Yet, there were no qualms about the genre of 12 Years a Slave. This provocative slave epic is the finest film of the year and plays out on screen like a classical opera. Best Picture Drama was its only win, but Chiwetel Ejiofor, Michael Fassbender, Lupita Nyong’o and director Steve McQueen could have all justly gone home with a Globe in hand (Nyong’o’s supporting role is probably more deserving than Lawrence’s).

Despite 12 Years a Slave‘s superiority, the race to a Best Picture Oscar is hotly contested. Slave and Hustle won Best Picture awards at the globes in their respective categories, but the wealth was sprinkled around the room. Gravity earned Alfonso Cuaron a questionable award for Best Director, while Her gave Spike Jonze some much deserved lovin’ for his beautiful and innovative screenwriting.

Now, let’s revisit the aforementioned politicizing, shall we?

This has been a remarkable year for comedies. Typically, the Golden Globes are special because it doubles major awards, giving those rare comedic gems their due respect. However, such was not the case this year…

With the exception of Blanchett’s acting nomination, Blue Jasmine was shut out. Woody Allen is a quirky, little American treasure and his latest tour de force can rival any of his previous masterpieces… Annie Hall, Alice, Play it Again, Sam, Vicky Christina Barcelona, Crimes and Misdemeanors, Midnight in Paris…take your pick; they are all marvels and Blue Jasmine matches their staying power. Allen deserved a double nomination (Best Director and Best Screenplay) and the film deserved a nod for Best Picture-Comedy/Musical.

Joseph Gordon-Levitt made quite the impression with his directorial debut, Don Jon, but he and his film were also shut out. Not only was he able to unleash the fiery Guidette

raging inside Scarlet Johansson (whose spot-on performance deserves an Oscar nomination), but he pulled a sweet, complex and terribly confused Guido out of his own acting chops, as well.

The Way Way Back is also a standout film that should have received some recognition. Steve Carell plays a jerk to such perfection, he becomes downright unlikable… A feat that seemed impossible prior to viewing. Toni Collette is fabulous as a single mom desperately trying to contain herself while looking for love in all the wrong places. And Allison Janney bursts onto the screen as the crazy, alcoholic neighbor you can’t live without.

If these omissions weren’t enough to pique your curiosity; how about all the television snubs?

Mad Men, Boardwalk Empire and Homeland combined for a whopping zero nominations. This is the golden age of television, for crying out loud and the three best shows on television were completely shut out?! That is an unsettling conundrum, to say the least.

Homeland may have waffled a bit mid-season, but the final three episodes were as good as any in the first two seasons.… And the acting by Claire Danes and Damien Lewis was perfection throughout.

Mad Men didn’t miss a beat this season. Matthew Weiner has taken his creation to new 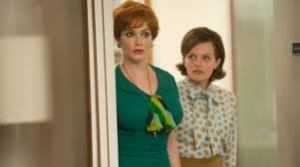 artistic heights with his rich character development. We now know that the one person capable of rescuing Don Draper from a lifetime of denial and anguish is his daughter, Sally. This season also gave us heartbreaking moments of truth for Joan and Peggy as they continue to climb on top of each other’s shoulders in order to experience love en route to shattering the elusive glass ceiling.

The latest season of Boardwalk Empire was arguably the best yet. Creator, Terence Winter, turned up the spice by shining the spotlight on some hypnotic female

roles. From Chalky’s burlesque shows to Margaret’s foray into business with Arnold Rothstein and Gillian’s thrill ride through the worlds of heroin, real estate, love, honesty, betrayal and prison; the ladies of Boardwalk exploded off the television screen… And the lampshades… Oh, those beautiful, entrancing lampshades!

Luckily, Breaking Bad received nominations, otherwise this situation would be down right laughable.

In or out. Take it or leave it. Awards season has arrived in a flurry and it appears as though the journey to this year’s Academy Awards will be one to watch.

*This article also appeared in the Loyola Phoenix.