For those of us consumed with Oscar season, Valentine’s Day has already been an infectious three-month affair. Our first dose of love came in November when Brooklyn was released. Later that month, the Danish Girl hit theaters, and we were injected with an even heavier dose of romance. Then, Carol was released in December, and we were infused with yet another intoxicating love potion. And finally, earlier this month, 45 Years opened nationwide, and our love sickness spiked once more.

Cupid’s arrow even found its way into the hearts of Academy members who responded by granting a combined 13 Oscar nominations to the films. All four love stories are driven by staunch women who aren’t clouded by their desires, but instead use them to guide their intentions. These heroines harness morality and devotion, and refuse to sacrifice their self worth to satisfy conventional wisdom. The five actresses in these films deliver enduring performances and were each recognized with a nomination.

This is the most simplistic story in the bunch, but Nick Hornby‘s screenplay and Saoirse Ronan‘s performance allow the film to soar. From the moment audiences are introduced to Eilis (Ronan), they are charmed by her wonderment. She is sassy yet refined with the perfect combination of intellect and naïveté.

As the film opens, Eilis prepares to leave everything she knows in her small Irish town and set sail toward a new life in 1950s New York. She goes through the motions of her final day methodically, as though any deviation from the norm would throw her off course, and manages to keep her anxiety at a slow simmer throughout the taxing voyage. When she arrives in her new world, she projects confidence and control, which aids her smooth transition into her boarding house and new job. It isn’t until she’s completely settled that all of Ellis’ pent up emotions pour out of her in a ravaging bout of homesickness. However, a quick antidote comes in the form of Tony (Emory Cohen), a dashing Italian fellow keen on Irish gals. Flirtation yields to romance, which eventually gives way to desirous young love.

Ellis is laying the foundation for a sturdy new life in Brooklyn when tragedy befalls her. She returns to Ireland where everything once familiar is now foreign, and she is forced to make decisions which will impact the trajectory of her entire life. Under the artful eye of director John Crowley, the film plays out on screen like poetry in motion. Ellis evolves from an idealistic girl into a stoic young woman in charge of her own destiny. The movie is a reminder that the purest joy can often be felt only after experiencing exquisite pain.

Einar (Eddie Redmayne) and Gerda Wegener (Alicia Vikander) are everyone’s favorite couple — established painters hobnobbing their way through the European art scene; enchanted by the love they share. One afternoon, Gerda needs a stand-in to complete a portrait and amusingly recruits Einar to don a pair of pantyhose and heels and drape a seductive gown across his body. As Gerda adds touches to her painting, Einar is hypnotized by the transformation of his legs — his masculine calves and large feet have morphed into limbs as delicate as a ballerina’s. Shortly thereafter, Gerda and Einar play dress-up again, and Einar attends a party in drag under the pseudonym Lili Elbe. As the evening unfolds, Einar disappears as his mind, body and soul begin a transition. Nothing in the Wegener’s lives is the same following that fateful night. 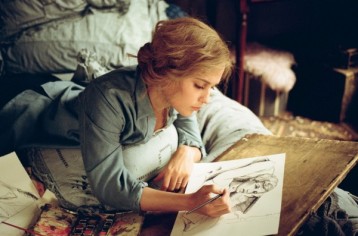 Vikander commands the screen in The Danish. Image courtesy of Focus Features

Director Tom Hooper juxtaposes his trademark wide shots with extreme close-ups to capture the characters’ dual isolation and intimacy. As Lili explores her authentic self, Gerda is forced to re-evaluate her entire existence. She eventually reaches solace in the most unexpected form:  Lili becomes Gerda’s muse. Gerda finds her true voice as a painter and starts producing the best work of her career. Once Gerda becomes accepting of Einar’s true identity, Lili Elbe sets both of them free.

Although the title, The Danish Girl, refers to Lili, one would not be faulted for applying it to Gerda. Vikander’s soul-penetrating eyes translate every emotion of her character’s pathos, allowing audiences to absorb Gerda’s anguish. When she pleads with Lili — aching to hold her husband again — the audience yearns alongside her. In the end, Gerda’s transformation is  equally profound as Lili’s, and Vikander’s performance resonates on a seismic scale.

Often the most powerful connection between two people occurs at the most unexpected time. For Therese (Rooney Mara) and Carol (Cate Blanchett), that moment comes at a toy store in 1950s Manhattan. A cautious flirtation bubbles between the women as Therese, the shopgirl, convinces Carol to purchase a train set for her young daughter. Fate is at work when Carol forgets her gloves, giving Therese an excuse to contact the alluring creature she just encountered. When the two meet up again, Therese is instantly enticed by Carol’s prowess — she is older, mysterious, drenched in 1950s glamour and commands every room she inhabits. Before long, Therese is thrust in the middle of Carol’s tempestuous separation and child custody battle. Eventually, Carol decides to evade her problems and whisks Therese away on a cross-country expedition.

Through mesmerizing cinematography and artistic direction, audiences are lured into Therese and Carol’s worlds, where agony and ecstasy are in a constant tug-of-war. Some of the most compelling camera shots are taken from behind smudged or rain-streaked windows, which captures the confinement of both women’s existence. It’s as though life is crystal clear on the other side of the glass where couples can walk hand-in-hand down the street regardless of sexual orientation. 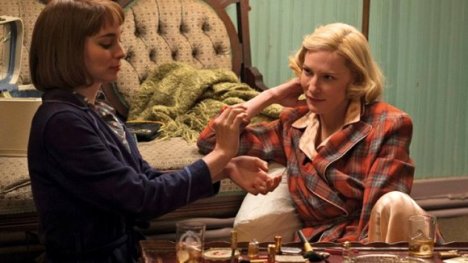 Mara (left) and Blanchette share a moment. Image courtesy of The Weinstein Company

Therese and Carol’s trek across America is less about escaping than it is about the exploration of desire. Therese’s piercing eyes drink in every ounce of Carol’s seduction as she submits herself to passion. Carol is a bit thrown by how madly she falls for Therese, but she follows her heart and takes a plunge into depths unknown. Time and space disappear for the lovers until reality brings everything to a crashing halt.

On a Monday morning in the crisp English countryside, Kate (Charlotte Rampling) and Geoff Mercer (Tom Courtenay) prepare to celebrate their 45th wedding anniversary on the coming Saturday. The intimate affair is falling into place just as Geoff is saddled with the news that the body of his onetime lover, Katya, has been discovered — she fell to her death 50 years prior, when the two were hiking the Swiss Alps. Kate has never known the details of Geoff and Katya’s love affair (or the circumstances surrounding her death), and at first, it is unclear how affecting the news will become. However, as the hours and days tick by, Geoff becomes increasingly withdrawn — behaving out of character, reverting to old habits. The isolation becomes unbearable for Kate, and she forces herself to examine Geoff’s past. As the week progresses, Kate’s discoveries release a ghost, haunting her every thought and movement. 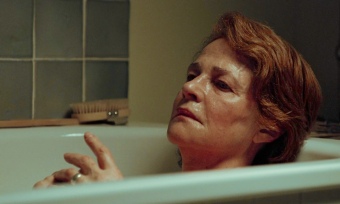 The soul of the film is nestled within Rampling’s performance. Kate is a woman of few words, but Rampling translates the gamut of her emotions through silent, pensive reflection. During long sequences of solitude, Kate’s perplexities radiate through her quiet contemplation. On Friday night Kate explodes, speaking her mind in a fury, and at long last, takes control of her situation. As Saturday evening plays out, the film’s final crescendo is hair-raising.

It has been a rare treat to have four unique, enduring love stories showcased in a single Oscar season. Stay tuned for my upcoming predictions to see which of these nominated films and performances have the power to strike Oscar gold.

*This piece also appeared in the Loyola Phoenix