I recently became the blogger for the Texas Animal Society. My job is to compose human interest stories about shelter animals. I’m sharing my work on Esse to help raise awareness for these animals.

There is a general agreement among animal anthropologists that Greyhounds are one of the seminal canine breeds from which nearly all domestic dogs descend. They have been traced back 8,000 years to early cave drawings and decorative artifacts. The Egyptians worshiped Greyhounds as a god and frequently showed them on murals in the tombs of Kings. Cleopatra used greyhounds for game, and according to legend, they are the goddess Diana’s hunting hounds.

The most defining characteristic of the Greyhound is its dynamic physique. Their large paws, light weight and long bodies are immediately noticeable. And when in motion, it’s clear they were designed to run. Greyhounds are aerodynamic — their bodies cut through air like bullets when reaching full speeds. They have a flexible spine and small waist with long legs, slender bones and big muscles. They are the fastest breed of dog on the planet.

Unfortunately, for the past 100 years, their bodies have been exploited for the sport of dog racing. And now, in the United States, thousands of young and healthy Greyhound dogs are killed every year simply because they no longer please their masters.

Greyhound racing is a 20th century byproduct of the older sport of coursing, in which dogs hunted by site rather than scent (hence the reason Greyhounds chase mechanical lures when racing). O.P. Smith demonstrated dog racing in 1919 at Emeryville, Cal., and the first track opened there that year. By the mid-20s, it had spread across the country, becoming popular in many states. Outcries of inhumane treatment became rampant in the ‘90s, and the sport has since been banned in most states. However, West Virginia, Alabama, Arkansas, Iowa and Texas still have active dog racing tracks, and several more states allow simulcast betting, in which bets are placed on dog races that are broadcast from elsewhere.

Racing greyhounds suffer traumas on the track including broken legs, cardiac arrest, broken necks and paralysis. Off the track, the dogs spend their time stacked in crates for 20 or more hours a day. Some are kept outdoors in dirt pens with minimal shelter, and no heat or air conditioning. The dogs are highly susceptible to fleas, ticks and parasites, and often go without basic veterinary care, adequate food or human affection.

Considering the calm, tenderness of Greyhound dogs, it’s gutting to learn of this widespread abuse.

Dempsey, 53, is a social worker in Chicago, and adopted his first Greyhound in 1998. At that time, he was living in Louisville, Ken., and noticed a woman with two Greyhounds while he was out for a run. She informed him about the racing and need for adoption. He was so moved by the story, he looked into it, and eventually adopted four-year-old retired racer Flashy. When she died at age 12, Dempsey and his partner, David, rescued Amy through Greyhounds Only in Wheaton, Ill., and when she passed away in 2012, they rescued two-year-old Sugar through the same agency.

“They really pick up on feelings, and develop a closeness with the owner that I’ve never experienced with other dogs,” Dempsey said. “They’re protective…and emotionally sensitive.” 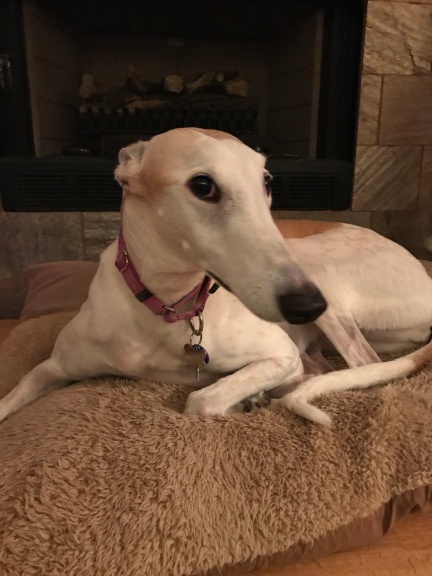 Sugar is retiring in style

Surprisingly, Greyhounds don’t require a lot of exercise and are comfortable living in small spaces. Dempsey takes Sugar out 3-4 times a day, and leaves her at home from 8 a.m. to 6 p.m. And she’s perfectly content in her cozy Albany Park condo. Like all former racers, Dempsey’s three Greyhounds lived in a foster home for two weeks after he selected them for adoption. While being fostered, the dogs become housebroken, learn to use stairs, and get accustomed to other household normalcy’s such as TVs, ringing phones and hardwood floors. Windows are also foreign to the dogs, and they must be carefully introduced to other pets.

Dempsey’s Greyhounds whined a bit the first night he brought them home, but after that, they started acclimating to home life. Over the first several weeks, Dempsey would wait for his dogs’ characters to come out, allowing their personalities to develop. He feels Greyhounds have a special sense that is unique to the breed.

“When talking to them, it’s like they’re taking a moment to think about what you said, and they look at you with eyes of adoration,” he said.

Greyhounds are anywhere from 18 months to five years old when they are retired from racing. Owners often deem them unfit to race after an injury or because they’re not progressing fast enough to be profitable. Once retired, if a dog isn’t sent to the rescue group, it is killed or returned to breeding facilities.

In November, Florida voted to ban the sport in their state by 2020. Now, the state has thousands of Greyhounds with no clear future. Some could be shipped off to other racing sites, but there will be thousands left in need of shelter and care.

As public interest grows and adoption rates increase, more and more people are becoming acquainted with this regal breed. They are intelligent, intuitive animals that become devoted to their owners.

“It’s like having a human around,” Dempsey remarked about a Greyhound’s companionship. “The affection and love you feel from them is incredible.”